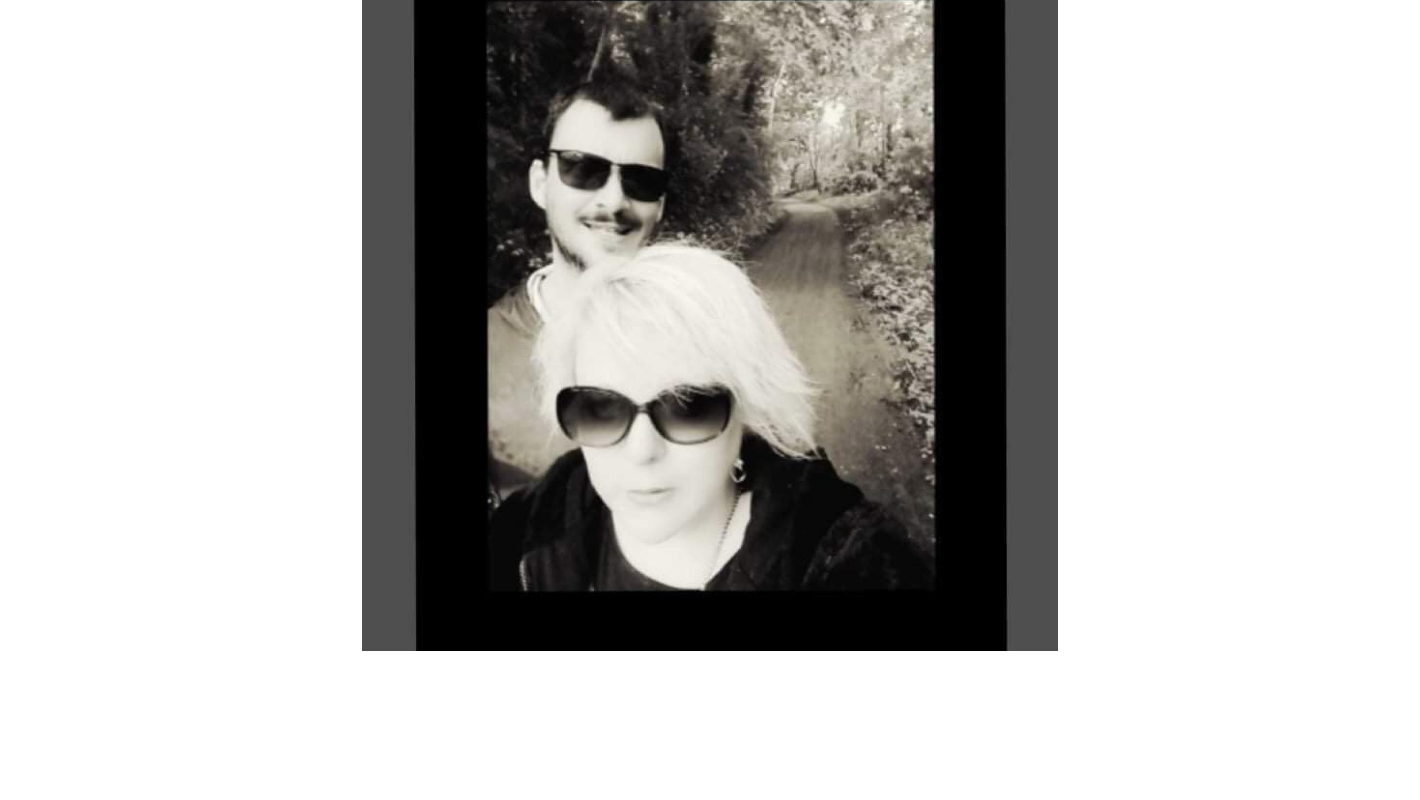 Today we are speaking to Valkyrie Kerry and Brett Dyer, members of the Horror Authors’ Guild, published authors, writers with the online group Legacy Tales, and far-flung lovers who met as co-writers on Twitter. After moving from South Africa to Ireland to be with Kerry, Brett joined her in creating the Immortalis saga. Unlike other authors, they created Role Playing characters of their work in progress and shared their ideas with the world across multiple sites. As such, they were able to work together to create a dark series. ‘The Thorn and His Rose’ is one of the horror prequels to the Immortalis novels. It was originally drafted during the international poetry marathon and is due for release in March.

Q: ‘The Thorn and his Rose’ is part of your Immortalis series, please can you explain to our readers what Immortalis is about?

Brett:  Immortalis follows the tales and interlocking stories of a series of immortal characters. Each traverses the eternity of their lives in search of both pleasures, and ultimately, power. Individuals serving their own agendas with blatant disregard for the lives of others, and each other. Characters rich in a shared history with man. Humanity is mere playthings in the pursuit of carnal, and macabre pleasure. No singular character could be said to be the antagonist or protagonist. Monstrous duplicity within the deed, physical form and power. The outcomes and journeys are laced with our interpretations of both classic and original monstrosities. Diverse in background and shared erotic goals alike. Rather risqué with a good dash of horror thrown in.

Kerry: Immortalis is a blanket term for our diverse range of horror characters, we have essentially created our own universe, a diverse landscape in which various monsters thrive. The Immortalis appear human, but each one has a dark background and thrives on pain and blood lust. The majority of the characters could be likened to some eternal beast that breaches the chasm between demon and vampire. Each character is uniquely affected by their curse, they manifest with different tendencies, but all are driven by desire; pain, pleasure and power, the three Ps. The tales are tastefully erotic and exceedingly gruesome and woven into a tapestry of history and culture.

‘Ultimate Horrotica’ is the first of the Immortalis books, it is a collection of tales written in various forms that span the horror genre. ‘The Thorn and His Rose’ is the second book, both are prequels to the novels which are also forthcoming.

Q: You already share aspects of your Immortalis stories on Twitter and numerous other platforms, how and why do you do this?

Brett: We belong to a writing group on Twitter, Legacy Tales. A group of wonderful friends sharing a mutual interest in fandom and the camaraderie it brings. We enjoy the contrasting views of fandom have share ideas, debate genres and throughout our tenure on said platform, our writing and ideas have developed. The positive feedback and support we receive steadily grows. Consequently, we decided to take the next step; tested the waters as it were.

We published across a multitude of platforms in December 2021. The result? My online notifications and devices would not keep quiet. An encouraging sign, I think. Motivationally speaking, my wife and I couldn’t have been happier. Bearing in mind, there is always more of the saga to be told.

Kerry: The actual format varied from platform to platform. We are members of the Role Play and Fan Fiction group ‘Legacy Tales’ on Twitter, so we have a history of adapting our tales for the format of that platform. There our stories are shared as a back and forth between the characters, and this really helps to consolidate the skills required for co-writing. Sometimes we take parts of the story (as drafted in Word) and post either linear stories or use Tweet Longer for full drafts. We also work in reverse, adapting stories drafted directly on Twitter into a more linear format and publish on other platforms.

We started using multiple platforms in December and shared selections of Immortalis across more than ten sites. Within minutes our phones were alive with positive reviews and responses. We also practise role-playing with the characters that we have created for the Immortalis series. It is all good practise and brings us closer together as partners and as writers.

Q: The first draft of ‘The Thorn and His Rose’ was written during the poetry marathon, can you tell us about this experience?

Brett: What an experience! The hours and fatigue pale in comparison to the reward. Kerry and I decided on writing in tandem over the 24 hours. Both unaware of the other’s response, oblivious to the gambits we would throw at each other’s feet. Neither prepared for what twists the tale would bring.  Even going so far as to ask our writing group, ‘Okay, who wants their namesake represented by a character? How would you like to go?’  Utilizing certain themes and poetry styles over the course of the gauntlet. Large quantities of coffee were consumed. Writing over that course of time with deadlines, wonderfully invigorating. Looking forward to the upcoming Poetry marathon this year.

Kerry: The International Poetry Marathon occurs once a year. Writers from all around the world write a minimum of 24 poems in 24 hours. It sounds easy, but it is not. The poems must be submitted hourly, hence no sleep. Brett and I decided to write a chapbook that would unfold as an Immortalis story. This was in June 2021, so we had already been writing together for a year. We wanted to create a work of art within a work of art, so we drew up a plan and wrote in Tandem (as we do in Legacy Tales), within 24 hours we had our first draft, a nice certificate and a place in the Marathon Anthology. We have since developed and added to that draft, hence the delay.

Q: Can you give us an insight into the story of ‘The Thorn and His Rose?’

Brett: We decided on portraying two serial killers. One, a mental health professional, the other, the patient. A poetic, and dark portrayal of the savagery within humanity. A slow-burning dance around two unforgiving predators. Mutually in love with each other, and, with their darker halves. Utilizing several themes throughout, the pair continually attempt to outdo each other. Slowly building to an unforeseen climax. It’s all a game to them.

Kerry: A therapist recognises her client as a serial killer, something that they both secretly have in common. As their relationship develops, they challenge each other in a duel of endurance and expression; turning murder into an art form. The book is laid out like an opera, and each act focuses on a form of art. As the horror of the challenges develop so too does their fear of an obsession with each other until the game is not one of art but one of control. The paranoia escalates resulting in an explosive crescendo. 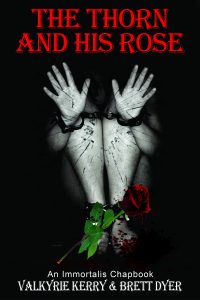 Q: How is it possible for two people to continually write stories together and stay in unison?

Brett: I truly believe we are utterly in step with each other. We share so many common passions in this life. We thrive on each other’s ideas. I have learnt so much from Kerry, and still have so much to learn. The wonder of the unknown tales to be told leaves me in fascination and expectancy of what’s to come. We constantly discuss, debate and high five over our suggestions and designs. Accepting alternative options and never dismissing the other’s ideas for further exploration. A soulful understanding and open dialogue help. Constantly communicating with each other with ease. Always taking time for each other is paramount.

Kerry: When we first started writing together it was haphazard. We made mistakes in formatting, we struggled to develop sagas. We learned along the way. As we learned the technical basics of two people writing as one, we also developed an understanding of each other’s styles, ideas, emotions and portrayals. It continues to bring us closer together if that is even possible!! Somehow, we gained some of each other’s style, our writing group say they cannot always tell ‘who is who,’ as our styles have merged to such an extent. In short, writing together continually enables and facilitates us writing together continually. We can write a story without speaking, though we are always communicating.

Q: What is coming after ‘The Thorn and His Rose?’

Brett:  Several more books in the Immortalis saga. With the steady introduction of various intriguing and sinister individuals. The expanded universe and landscape that we wish to create and share with all. Not only to create, but to investigate. To take the tapestry of Immortalis and put it under the microscope. Find out why and how these characters’ choices are governed, their backgrounds. Perhaps, in certain immortals, the reader would be left to decide?

Kerry: These are prequels for us, we have already mapped out and written a great chunk of the novels. We have taken the characters in new directions, shared and developed ideas across various platforms. ‘The Thorn and His Rose’ is the grim and bloody cartoon before the forthcoming main feature.